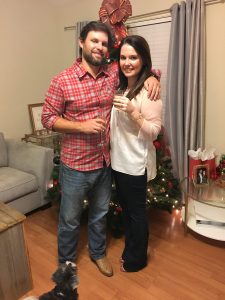 Well, I suppose it’s a good thing I have some experience with event planning because it’s time to plan one for myself! I’M ENGAGED!!!! Yup, on 12-22-2016 that boy dropped to his knee in front of our Christmas tree and opened up that tiny wooden box to reveal the RING OF MY DREAMS and DUH, I said yes!

Thursday (12-22-2016) was a normal work day. We had plans to go eat dinner with his family that evening and head to his parents’ house to open presents as I was headed out of town the next day to spend the Christmas weekend with mine. This has kind of been the deal every year so I thought nothing of it. My best friend Stephanie (she’s actually the one that introduced us) asked if she could borrow a dress earlier that week so when we left his parents’ house she was going to head over.

We pulled into the drive and there was Stephanie waiting for us. As we walked inside Steph became VERY interested in my Christmas tree, which she has seen before, lol. She kept me there asking me about my ornaments, which she’s seen before. Still none of this seemed strange to me. Then she scampered off and Matt gave me a hug and a quick kiss and smiled at me, which he does often, so still not strange.

Then, his eyes became watery and his voice began to shake. He dropped down to his knee and blinded me with that ring. It was incredible and surreal and perfection. Meanwhile Stephanie is in the corner snapping away with her camera. I had mentioned to her that I would love a photo of that moment and the two of them made it happen.

Later I find out that Matt, my mom and all my friends had been in cahoots all week long trying to come up with a plan to keep me in Lafayette Friday night so that he could do some big proposal. One of the plans included something about “disappearing” Stephanie’s cat to lure me to her house to help search while she locked my keys in my car so that I couldn’t drive to my parents’ house so I had no choice but to stay in town for the night…I mean…hahahahaha! Finally he decided to keep it simple, in our home and I’m so glad he did. I wouldn’t have changed a thing…except for maybe my outfit and hair ☺

I’m still floating, over the moon; I’m all the cliché’s you hear when someone gets engaged. I can’t believe that this man is who I get to spend my life with. Never did I think I would be so lucky. So, let the planning begin!